From September 1994 to April 1996, Seth Narins, Don Parsley, Rob Sama, Adam Shostack, Eva Swoboda and I played in a Second Edition Dungeons & Dragons campaign run by Jeff Herrold. One of the cooler role-playing experiences I've ever had, the campaign world and plot were extremely rich I took to building hypertext pages to keep track of it all. These pages, such as they are, are presented here.

There was also this obnoxious goat that seemed to follow us around everywhere. Anyway, as a party, we generally were effective enough to slightly inconvenience those much more powerful than us, but never so much so that they felt the need to smite us. Someone referred to us collectively as a "thorn in the side of the Red Army", and the name Thorn stuck with the group. Some quotes from the campaign may illustrate this somewhat. 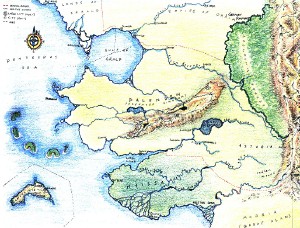