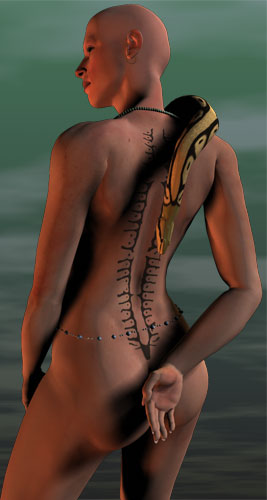 As a girl growing up in a village on the Grey River on the edge of the jungle, Saerssa spent a great deal of effort disagreeing with most of the villagers, particularly the elders. Village lore held that a great, beneficent crocodile-god protected the village. Many of the elders claimed that this crocodile-god would visit the village regularly, but Saerssa never saw him and determined that if he once did, he had not done so for half a century. She railed for years against the villagers for believing in this god until one day, the crocodile-god came. The villagers held out offerings, and praised him but, for no evident reason, he began to kill villagers. After ravaging several women, he vanished, leaving a destroyed people in his wake.

The survivors blamed themselves for lack of faith and their cult to the crocodile god began to make monthly offerings to him in penance. After several years, the village continued to deteriorate, and the high priestess of the cult called for a human sacrifice to appease the crocodile-god. Being a vocal trouble-maker, and often blamed for the whole mess, Saerssa was “volunteered” for the task.

After tattooing her back in preparation, the villagers shackled and led her to the center of the square. As the priestess performed the preparatory rites, Saerssa realized that she could only save herself. In desperation, she broke her own thumbs so she could slide out of the shackles. Seconds afterward, she exalted.

Within minutes, the priestess and many villagers were dead, and Saerssa was deep into the jungle, eating the heart of a constrictor. Weeks later, she managed to track down the “crocodile-god” who turned out to be lunar named Keening Black Loss. While older and more physically powerful than Saerssa, Keening Black Loss had lost all grip on reality, acting entirely on reptilian instinct. After a tough battle, Saerssa managed to outthink him and destroyed him, claiming his territory as her own.

After an affair with Cruxis, Saerssa was brought to Jaguan by Guen. She was taken to the Silver Pact and properly initiated as a changing moon.

Saerssa completely lacks hair, not even eyebrows. Her forked tongue allows her to taste the air much like a snake and a tattooed pattern reminiscent of a snake graces her back. When she bothers to wear clothes, they tend to be light and don�t cover much. In beastman form, she appears as a human with a snake head and a tail extending from her back. She tends to hiss in beastman form.