Much of the mine's anonymity has been meticulously constructed by the Immaculate Order. While well known and well protected by the Solar Deliberative, the Order spent a not inconsiderable amount of effort early on in erasing all mention of the mine and nearby solar temple, though they left enough of it intact to be able to find and use it themselves. This purge had two unintended consequences. The first is that defending the location becomes a bit tricky, as routing huge amounts of men and material to a remote jungle is bound to cause inquiry and suspicion. In the end, once the effectiveness of the Wyld Hunt became clear, only a small terrestrial force was assigned to the mine, with the secrecy of its location acting as its primary defense. This choice led to the other unintended consequence, which is that with the purging of records about the mine, very few in the Immaculate Order itself are even aware of the mine's existence. The few that do view the place mostly as a way to station troublemaking terrestrials someplace out of the way.

The Empress has ordered that none of the magical metal be mined, under the theory that the risk of adding more of the purified solar metal into world outweighs the use to which the Empire might put the material. This doesn't stop the dynasts stationed there from working a token amount for their own use out of the mountain. Some even work deals to smuggle some of the metal out for profit.

In the mountains to the southwest of the Lap, find the temple built upon the twins. Just as the Unconquered light retires, let its child face the family from under his father's hand. The sun of the son of the Sun will show the way.

Regret did not think much of this at first, but after spending in time in Gem, realized that he could use an orichalcum mine. In the Lap, after much digging, he discovered that the twins referred to particular a rock formation, two spires of rock jutting from the jungle, one with a solar temple at the top, the other with a temple to Luna. He attempted to find references to the location of this formation, but there were none. He did keep seeing modern references to a single spire of rock called Last Basalt, which was rumored to be haunted, as "no one who goes there ever returns". Eventually, he ran across a poem in an old book that suggested a battle in which a temple to luna that soared to the heavens came crashing to the ground. This instantly suggested to him that perhaps Last Basalt was one of the twins, the other having been destroyed.

After looking into the stories of Last Basalt's haunting more closely, he discovered that rather than a haven for ghosts, the spire was the lair of a lunar exalt. Most of this information came from a dragon-blooded who, well into his wine store, claimed to have captured and killed the mortal mate of this lunar, taking a moonsilver ring the lunar had given her. Regret took the terrestrial's head, his diary, and the ring.

From the diary, Regret discovered that the temple atop Last Basalt was an open-air stone circle, with statues of the celestial incarna. He was fairly certain that he knew how these statues played into the riddle the ghost told him, but he had no way of testing the idea until he was found in the lap by the circle. Eventually, he led them to this temple, where Gutts, a "son of the Sun" stood under the arms of the statue of the Unconquered Sun, facing the rest of the statues, and ignited the "sun" of his anima banner. The resulting lightshow bounced between the statues, finally reflecting off of the Maiden of Secrets across the valley, and lighting a white flame at the top of the concealed solar manse of the mine. 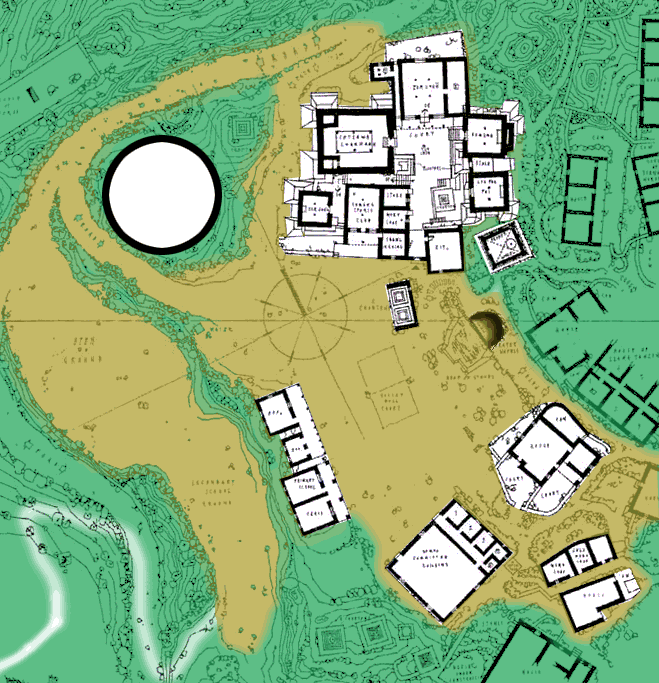 In spite of eliminating all the dragon-blooded present, the circle could not attune to the manse because someone else was still attuned to it. They elected not to alter the manse to remove attunements, fearing it would alert someone to their presence. For the same reason, they returned the manse's stone to its hearth.