Though original confused, conflicted and indecisive, Regret's hatred of the Lover has given him more focus. He is, however, torn by the desire to embrace life again and the pull of his oath to the underworld.

Birth into a merchant family gave the boy who would become Regret of the Sun enough education and spare time to grow envious and resentful of his lack of social mobility. He joined the Imperial Post at a young age, due more to a desire to see the rest of the world than any patriotic feelings for an empire he considered far too rigid and petty. Soon after becoming known for his willingness to deliver into "barbarian" lands, he was secretly recruited as a courier by agents of House Iselsi. This eventually led him to create an expanded "side business" as an information broker. 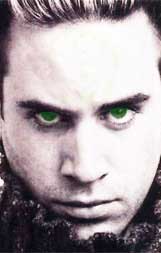 After several deals involving the Immaculate Order, he became aware of a force of fifty dragon-blooded being assembled into a Wyld Hunt, supposedly due to a prediction that a powerful solar would exalt on an isolated, wooded road nearby, though with indications that something may be "off" in the prediction. Wanting to gather information on the capabilities of the dragon-blooded, he traveled secretly to the road and waited in hiding. The Wyld Hunt arrived silently one by one, setting up an ambush.

As he watched the girl's flesh burn, the man who would become Regret felt the torrent of magic stir something within him, then the circle of night flared from his forehead as he, too, exalted. With the Wyld Hunt occupied, he managed to flee without detection, but the Immaculate Order soon realized that what had seemed "off" about their prediction was that it actually indicated the exaltation of two solars at the same place, not a single powerful one.

The Wyld Hunt tracked the man who would become Regret for over a year, an on-and-off chase culminating in Gem. Trapped and seriously wounded, the hunt's prey took the only path of escape available to him, through one of Gem's many small shadowlands and into the underworld. Carrionis soon found him and took him to his mistress.

Not predisposed towards Creation before he exalted, the new solar learned to truly despise it after a year of being tracked like an animal and shunned as anathema. By the time they reached the Lover Clad in the Raiment of Tears, the solar had inherited some of Carrionis' zeal, particularly against the Empire.

The solar spent two weeks in the Lover's company (and bed), being shown all the power of oblivion and its inevitable victory over life. By the end of it, he agreed to become her new deathnight. Though enthusiastic at first, after the Lover’s Malfean lord accepted him, he began to suspect that he had been duped, and shown only certain aspects of the underworld. By the time he was cursing Creation within the Monstrance of Celestial Portion, he realized he had make a serious mistake. This realization, however, made him more angry at Creation, and he cursed all the more.