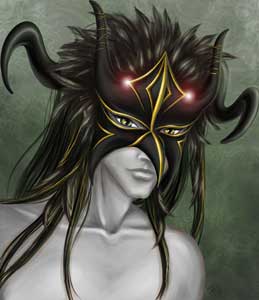 The ghost now known as Bezul was born over a millennia ago on a farm outside Q'in Sanizaj. He had given up farming to start his own business in in the city when the Contagion struck, followed by the fall of the city to Fair Folk. He managed to live through both and escape into the wilderness, but the Wyld energies that followed the Fair Folk soon had mutated him, turning him into a giant with a quilled tail. He survived for a few months in this state, but was eventually killed. His mutations had been so complete that he retained them in the Underworld, an oddity lost among the vast horde of Contagion victims now flooding the land of the dead. While he avoided official scrutiny in the confusion and thought to set himself up in the Underworld, the call of the Wyld was too great, and he returned to it, periodically at first, then for good. As he did so, he renounced his given name (i.e. learned Former Life Destruction Technique), taking on the name Bezul.

Bezul lives to explore, largely addicted to the Wyld's shifting nature and how even familiar places can be different. His experience in the Eastern Wyld makes him an invaluable guide to the area, a fact he occasionally capitalizes on. He has rescued a number of Guild caravans who got lost on a number of occasions, escorting them out of the Wyld. Bezul also has first hand knowledge of the First Age, at least from a mortal perspective, and has talked with his share of savants daring enough to enter the wyld.

As a former citizen of Q'in Sanizaj, he is well away of Wyr'palja, though she had died before he was born. He has always found it distasteful that her tomb was found by Cahlenna and used as bait for lunars, so he greeted with some joy the news that the tomb had been taken from her by the legendary unshaped Kinaniz, though he is unaware of its history and doesn't know that Cahlenna is now its captive.

Cult allows regen of 2 motes per hour. Also, with twelve points of mutations and a willpower of 8, he can live outside the Wyld for five weeks before taking one health level per week that does not heal until returning to the Wyld.