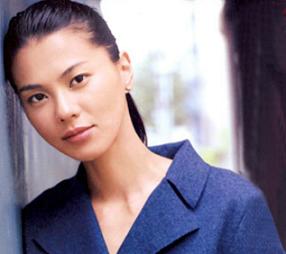 Makiko Esumi is a human monk in the Greyhawk campaign, played by Ryoko.

The earliest memories that I have are of Master Tojo taking care of me in the monastery. I don't know my parents, only that I was given up shortly after birth on the steps of the monastery. Master Tojo originally called me Hanako because it was during the bloom of the Cherry Blossom that I was found.

I am a Novice Monk at the Eiheiji Monastery. Ever since I could remember I have studied Nichiren Buddhism under the tutelage of Master Tojo. Nichiren teaches that to attain enlightenment, one needs to achieve emptiness. At first, the Monks did not know what to do with me, and were considering bringing me to a local priests home, when Master Tojo said he saw promise in me. The Monks took me in and cared for me until I was about 5 years old.

At that time, Master Tojo had me understand humility by cleaning everyone's clothes. Menial work is the most honorable kind of work there is. I enjoyed my position and washed all the clothes with pride. As I got older, Master Tojo had me do all other kinds of work from cleaning to gathering water to preparing food.

By the time I was 9, Master Tojo began training me as a Monk. It was rigorous martial arts training in the Shorin-ji style while continuing my spiritual training in Nichiren Buddhism. This I continued for many years. One day I decided to name myself. I chose the name Makiko Esumi because of the monastery's location and how I felt my training was affecting me.

During my stay at the monastery, I was the only women training to be a Monk and this bothered some of the more traditional Masters. I was tested much more than the others, but I endured their prejudices.

One of the things I liked to do sometimes during my training was to sneak out of the monastery and see how ordinary people live. I saw merchants, farmers, nobles and samurai in the nearby port city of Nagasaki. I learned that people from other cultures came to trade at the nearby island of Dejima since they were not allowed in the city proper. On that island were some of the most amazing people I ever saw. They had different skin than mine, some lighter, some much darker. They spoke a strange language that sounded like the grunting of a pig to me at first.

Over time I continued to secretly visit Dejima and learned their grunting language known as Common. I befriended a sailor from there named Rex Ondel. He told me stories of lands filled with so many different cultures and of dread monsters and creatures. One place he told me about was the great city of Greyhawk which he considered to be the jewel of the land. He amazed me every time we talked and I would sometimes get in trouble for staying too long and being punished when I returned to the monastery.

When I turned 20, Master Tojo said that my initial training was over, but there was much more to learn. The path to enlightenment was long and it was my decision on how to achieve it. I said that I wanted to travel to distant lands and learn of other cultures. There is where I will find my enlightenment. Master Tojo was glad I made a wise decision and gave me some coins to help me on my way.

With my staff and bola and an open mind, I asked Rex Ondel if I could earn my way on a return trip to a faraway land. The captain of the ship was not too happy, especially since I had no practical shipboard experience. He said that I could come, but only as far as the first port, then I had to leave. This was fine for me.

Sailing was a vigorous experience and I learned a great many things from the sailors on the ship. I also gained the respect of the sailors when they saw that I could defend myself against someone with too touchy-feely hands. We landed at the port city of Gradsul in the Kingdom of Keoland. This is where I said farewell to the sailors and welcome to a new land.

It was none too hospitable that first night. I was newly arrived and a bit naive. I barely escaped with my life that night when I was attacked by several drunk men in the small inn I chose. I left town as quickly as I could and used the last of my spending money on a river boat heading north.

When the river split, the boat stopped at a town called Riverhead, the captain told me to change boats, he said that unless I paid him more, I couldn't take the boat up the full length of the river. The money I spent would only allow me to go up the smaller river and end at a town called Helvic. I reluctantly took the other boat, feeling that it was more of my foreignness then my lack of money. Money seems to drive peoples hearts here as well.

I finally arrived at my final destination, the town of Helvic. It is a walled town that is home to about 500 people. Much trade is done here between the miners up in the mountains and the traders in the south. I will stay here for a short while to work and make a little money to purchase traveling food and then head north to Greyhawk.

I never knew that the gods led me to this place, where I met new friends who would lead me on the true path to enlightenment...