Difference between revisions of "Sikarsis" 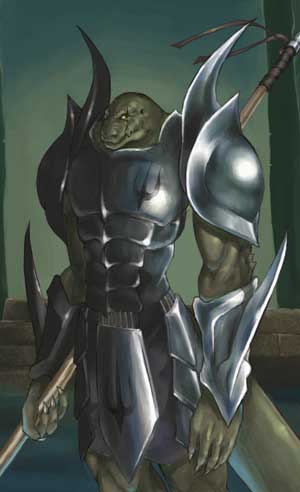 Sikarsis is an assarai cleric in the Dissolution campaign, played by Wordman.

Sikarsis lives without regret and without planning, deriving all the happiness he can from the moment. He tries to get others to appreciate their present, get over the past and not worry about the future. He makes acquaintances easily, but neither asks for nor honors obligations to them, so has few true friends. He is completely unconcerned with appearance or fashion and only vaguely aware of prejudice against assarai.

While fairly drab for an assarai, Sikarsis's bright yellow eyes stand out against his grey-green skin. He average height (5'11"), but with broad shoulders and a long tail. His armor and weapons are well maintained, but his clothing is usually tattered, often stained and occasionally mismatched. He doesn't see the point of jewelry, but wears a silver holy symbol of Engelan on a chain around his neck.

Sikarsis worships Engelan, God of the Present, but while he often encourages other to follow the tenants of his god, rarely evangelizes for him by name. The clergy of Engelan has no structure whatsoever, with temples (usually run more like hospitals or shelters) being run by loosely connected individuals.

As soon as he arrived in Ptolus, Sikarsis became a guildsman in the Delver's Guild, giving him access to guild information, library, maproom and waystations. He also gains a 10% discount at Ebbert's Outfitters.

Having worked briefly in a brewery, Sikarsis was required to become a low-ranking member of the Brewer's Guild.