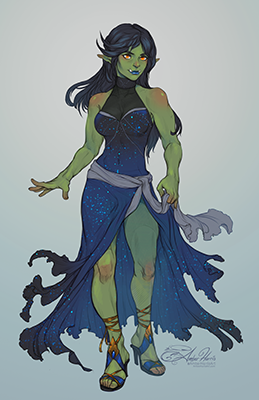 Lostwhite is a half-orc fighter in the Dissolution campaign, played by Wordman

Extremely well groomed, Lostwhite tends to wear fashionable clothes (not easy, while carrying a large flail) and tasteful jewelry. Very tall, when not in armor she tries to show off her long legs and strong arms, but tends not to wear anything very revealing.

Lostwhite make sacrifices to the Lady every week.

Had Lostwhite continued as a Pathfinder character, she would have followed this progression: