Denagoel, The Lie Which Deceives Itself 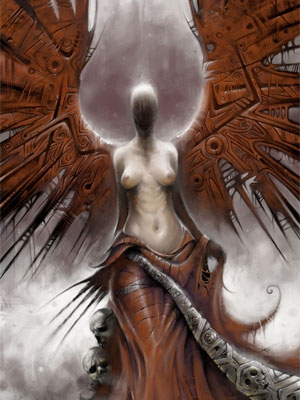 Denagoel forms the third soul of the Yozi known as the Ebon Dragon, embodying his mastery of falsehood, deceit and double-dealing.

Particularly delights in creating truth that is treated by everyone as a lie.

Summoning: (Obscurity 4/5) Few know of Denagoel existence, because she has been imprisoned for so long.

Motivation: To so confuse and conflate truth and lies in the minds of all around her, that they abandon all notion of belief in anything.

Confirmed Rumor – Over the course of one week, Denagoel may introduce a false rumor that all mortals within a circular area a hundred miles in diameter will be convinced is certain truth. This false belief holds even in the face of absolute proof to the contrary, as the target will invent any number of rationalizations as to why the evidence is not to be believed. Creatures with an Essence of two or more can resist this illusion with a Resistance + current Willpower + Essence (6) roll. Even those who resist do not recognize the rumor as being part of a magical attack without a Perception + Occult (6) roll. Mortals also get such rolls if the rumor directly targets them, or contradicts a Motivation or Intimacy.

Plausible Denial – This power works just as Confirmed Rumor does, but makes its victims believe that some truth is a lie. Note that this does not affect the actual reality of the situation.

Shinma Birth – Denagoel may physically join with her expressive soul, Oosvec. While so joined, when the Womb of the Lie gives birth to one of the leogim, the birth also includes a Shinma Circle spell. The new demon becomes the spells lorekeeper, responsible both for its maintenance and its delivery. The spell must spend nine of its 18 mutation points to contain Undetectable Lie (masq.138). The assumption portion of the spell need not be tied to the new demon’s body, but often is.

Silver Tongue – Once per day, Denagoel may bestow any single target with the gift of presenting the truth as a lie or a lie as the truth. Until the sun next rises, any attempts at such persuasion gain nine automatic successes. These do not count as bonus “dice” from charms. Further, the subject becomes highly resistant to magic that compels truth, detects lies or similar effects. Such effects that require a roll to work automatically fail. Those that succeed automatically must make a Perception + Occult (9) roll to function.

As a third circle demon Denagoel is composed of component souls. They are: