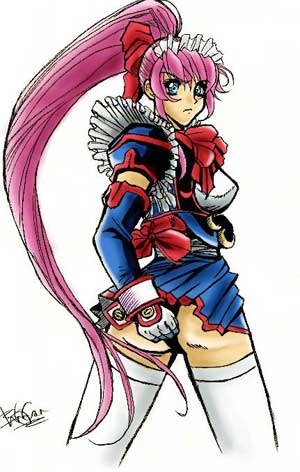 Caralaria is a human barbarian/monk in the Dissolution campaign, played by Scott.

Though trying hard to follow the path of the monk, Caralaria is often frustrated by those around her and prone to petulant temper tantrums and violent rages. She is also eager to do well.

While living in the wilderness as a girl, she ran into some form of chaos magic, which altered her appearance, giving her violet eyes and long pink hair. She dresses in the robes typical of her monastery, which seems to constantly adjust themselves to inadvertently show off her cleavage.

Born in a barbarian tribe, she fought as a warrior even when very young. Her whole family and most of her clan was wiped out in a raid, and she was severely wounded and left for dead. She was found by a traveling monk, who took her back to the monastery. Once healed, she decided to become a monk herself, in order to quell her violent rages.

Part of a monastic order called the Path of Iron, Caralaria and the other monks look to iron and other metals for inspiration, trying to emulate its attributes in their fighting style. The order reveres The Iron God, and contains a number of blacksmiths and other metal workers. The order owns and operates a monastery in the Guildsman District, near the borders of Midtown and the Warrens.

Caralaria is a guildsman in the Delver’s Guild, giving her access to guild information, library, map room and way stations. She also gains a 10% discount at Ebbert’s Outfitters.

Some of the people Caralaria knows are:

Next will be character level 12. Some possibilities:

All characters gain a feat every two levels. Her next such feat will come at CL 13. Some of the feats you have the prerequisites for are (there are, of course, others):

In spending the skill points gained on her next level, teachers in her monastery have encouraged her to learn Craft (Blacksmith), Craft (Weaponsmithing) or Craft (Armorsmithing) as a way to become more in tune with the properties of iron. The monastery has tools and facilities for metalworking of all kinds.

Caralaria will now have a bit of wealth. Monks don’t particularly care for hoarding wealth for its own sake, so would encourage spending it to improve others or herself. The monastery does not require donations from monks, but most monks contribute to the running of the monastery when they can, either with cash, food, raw materials, etc. Sacrifices to the Iron God are also appreciated. As for spending it on herself, monks don’t need much compared to other classes. In addition to the aforementioned weapons, you might be able to find some useful magic items for sale. Some possibilities: